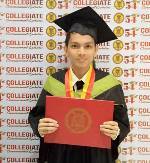 s accepted as an Anak scholar in 2012, he is a second year high school during that time.  He studied in Domingo Lacson National High school, consistent honor student and graduated as Salutatorian. Joemar was a cute little boy. He was the smallest among other scholars, shy and reserved. He is seldom seen talking to his co scholars.  However, he was very responsible, when he arrived at Anak office, he picked up his task right away and did it silently.

Joemar is the youngest among 5 siblings, his father died when he was 9 years old. His mother is doing laundry job to sustain their daily needs. Their poor situation made him strong to finish his studies and to reach his dreams.